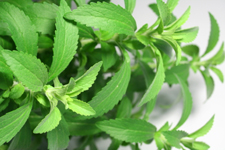 What is the link between diabetes and stevia? Interestingly enough, stevia is a natural sweetener that doesn’t raise your blood sugar. Now, if you’re like me, this concept seems incredible to me, even a little unbelievable. Yet, this natural plant has not been without controversy, I would argue unfairly.

However, before we get to the controversy, let’s first take a look at what stevia is. The name refers to a genus, or family, of over 200 herbs primarily grown in Central and South America. Its main use is that of a sugar substitute because it has up to 300 times the sweetness of sugar.

Yet, stevia does not have a significant effect on raising blood sugar (blood glucose) levels. This property makes stevia very attractive for diabetics on a low carbohydrate and sugar diet, because it satisfies a person’s sweet tooth, yet doesn’t adversely affect their blood sugar.

Like many things in life, the herb is not without its controversy. It was originally banned in the early 1990’s under the logic that it was untested, thus not proven to be safe.

This decision was apparently in contradiction to FDA guidelines and has been criticized as being politically motivated due to pressure from members of the sugar substitute lobby (i.e., aspartame manufacturers, among others). There’s nothing like a good political and big business conspiracy!

Regardless, in 1995 the herb was approved for use as a dietary supplement, but not as a food additive. This means stevia was not allowed to be added to foods for sale, such as in soft drinks. Instead, you had to buy the product separate and use it however you wish.

Other controversies have also followed stevia. Early studies, mostly prior to 1991, suggested that stevia could cause genetic mutations in rats. The implication was that these mutations could occur in humans, possibly leading to cancer.

There does not appear to be any significant subsequent supporting evidence and the initial study has been criticized on procedural grounds (i.e., it used incorrect scientific protocols). In 2006, the World Health Organization (WHO), found no harmful effects from stevia and made specific note of the herbs possible health benefits. Conspiracy theorists believe stevia was deliberately sabotaged by competitive artificial sweetener companies.

WHY STEVIA ARE A GOOD FIT FOR PEOPLE WITH DIABETES

As mentioned above, stevia sweetener is attractive as a sugar substitute that does not cause an adverse affect on blood glucose levels. Bring on the chocolate cake (made with stevia of course). However, some studies suggest that the benefits of stevia are much greater.

Even more encouraging for the stevia and diabetes link, stevia has also been shown to increase insulin sensitivity. Meaning, it may reduce insulin resistance, helping the cells use insulin.

Additionally, it has been shown to help stimulate insulin production. These two benefits are great news for diabetics. These benefits have not been demonstrated sufficiently in human studies, but shown great promise in laboratory rats.

Industry heavy weights such as Coca Cola, Cargill and Pepsi have developed stevia based sweeteners for use alone and as a food additive. These products are based on an extract of stevia, not the entire herb.

In December 2008, the FDA gave its approval for the stevia extract rebinia (Reb A) as a food additive. Coca Cola and Cargill have already branded the product Truvia, based on the rebina extract, and it is set to be used in a host of new products. PepsiCo, Whole Earth Sweetener Company and Pure Circle have also announced PureVia as their equivalent product.