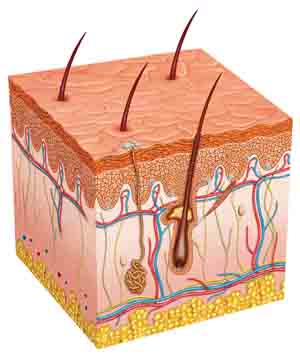 If you have diabetes skin problems, you are not alone. That itchy skin and dry skin is no accident. In fact, diabetics are about 30 percent more likely to develop a skin disorder than non-diabetics.

The good news is that, unlike many other diabetes complications, most of the skin disorders can be prevented or easily treated. The most common conditions are fungus and bacterial infections and excessive itching.

Many of these conditions are the same as anyone else gets, only diabetics tend to get them more easily.

Bacterial infections are probably the most common type of skin condition. These infections include:

Symptoms of bacterial infections are usually inflamed, hot, swollen, red and painful tissue. The most common bacteria causing infections is the staphylococcus, often referred to as staph infections. Historically, death resulted from these infections in diabetics, but antibiotics and good blood sugar control has thankfully reversed this.

The most common yeast or fungus infection is called candida albicans. This fungus causes itchy red rashes surrounded by tiny blisters and scales. They occur in moist warm areas such as between fingers and toes, armpits, the groin, under breasts, and under foreskin.

Other names for these infections are jock itch, athlete’s foot, and ringworm. Fungal infections require medication, so don’t suffer in silence. Call your doctor!

Poor circulation, dry skin or a yeast infection can also cause localized itching. The itching can often be self treated through mild soap and skin cream. Nonetheless, do not hesitate to consult your doctor if you have any concerns.

Atherosclerosis. Atherosclerosis is the condition where the leg arteries thicken. This condition can occur in all individuals but is common with diabetics and occurs earlier in people with diabetes. The skin becomes shiny, hairless, thin and cool, as the blood vessels in the leg narrow. Exercise causes calf pain and toenails thicken and discolor.

Foot and leg injuries are more common, as the person does not feel pain, heat, cold or pressure well. In fact, undetected injuries can lead to increased infections. Healing is also slowed.

Diabetic Dermopathy. Changes to the small blood vessels can cause diabetic dermopathy, a skin condition found on the front legs. Often mistaken for age spots, diabetic dermopathy looks like light brown scaly patches, oval or circular in shape. The National Institute of Health states that the condition is harmless.

Necrobiosis Lipoidica Diabeticiorum (NLD). NLD is very similar to diabetic dermopathy, but the spots are larger and deeper. This is a rare condition, most common in women. The spots may become itchy, red and crack open.

Diabetic Blisters. Diabetic blisters are very rare. They can be a side effect of people with diabetic neuropathy. Most commonly, these blisters will appear on the backs of fingers, hands, toes, feet and occasionally on the legs or forearms. The blisters are large, but painless and no redness is present. They usually are self healing within 3 weeks with no associated scarring. The only treatment is to normalize blood sugar levels.

Eruptive Xanthomatosis. This skin disorder is firm, yellow, pea-like enlargements, each with a red halo. The bumps most often manifest on the backs of hands, feet, arms, legs, and buttocks. Men with type 1 diabetes are most often afflicted with Eruptive Xanthomatosis. High cholesterol and fat in the blood is the most common cause. The condition typically goes away when proper diabetes controls are put in place.

Digital Sclerosis. Digital Sclerosis is thick, tight, waxy skin on the backs of hands (sometimes forehead and toes as well). Finger joints become stiff and do movement is limited. Approximately, thirty percent of people with type 1 diabetes are afflicted. Again, blood sugar levels need to be regulated to reign in the condition.

Acanthosis Nigricans. Tan or brown raised areas occur on the neck, armpits and groin, and occasionally on the hands, elbows and knees. Acanthosis Nigricans occurs do to extreme weight. Some creams may diminish the appearance of the blemishes, but weight loss is the best treatment.

Disseminated Granuloma Annulare. This condition develops ring or arc shaped raised areas on the skin, mostly away from the core area (i.e., on the ears, fingers, etc.). The blemishes can be red, red-brown and even skin color. See your doctor for a medication to clear disseminated granuloma annulare.

If you have diabetes skin problems, now you have a better idea of what it is and how to fix it.