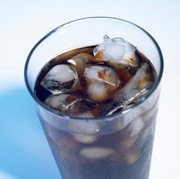 Clearly, few drinks are as American as coca cola. However, diet coke and diabetes have a more clouded association. This same cloud hangs over most diet sodas, as well.

So, what is the controversy? Three recent studies suggest all diet sodas, not just diet coke lead to a number of poor health conditions, particularly for diabetics.

First, a 2005 University of Texas study found that people who drink several cans of diet soda a day are more likely to gain weight or become obese than those who drink regular soda. In fact, the researchers found that for each diet soda drunk, the risk of obesity increased 41 percent on average.

The study further broke down the increased risk by number of cans consumed daily:

Why the increased risk? Interestingly, it may be that many people, who drink diet soda, do so because they realize they are becoming fat. As a result, they cut back on calories by consuming diet soda, instead of regular soda. However, the basic habits that cause obesity (lack of exercise, over eating) still exist. I have heard some stand up comedians make fun of overweight people who drink diet soda. Who knew there might actually be scientific evidence supporting the comedic barbs?
Diet coke and Diabetes

Another explanation is that the body receives the sugar substitute, but not the associated calories. Thus, the body mi sses the calories associated with the sweet taste, causing you to seek out the food and overeat. Regardless, critics, and the study scientist themselves, do note that the link between diet soda and weight gain is somewhat tenuous at this time.

Second, a 2006 study by the Dartmouth Medical School found that diet soda increased blood glucose levels. The study found that people, who drink more than 1 diet soda daily, increased their A1C level 0.7 units. The study concluded that there is a correlation between drinking diet soda and glucose control. Anecdotally, diabetics have been reporting these same phenomena for years.

These are three studies suggesting that diet coke and diabetes do not mix. Certainly, there are a number of studies which contradict these studies.

In fact, more recently in 2011, a study published in the American Journal of Clinical Nutrition, claimed that there was no link between diet coke and diabetes (all artificially flavored drinks, really). The researchers concluded that people who typically choose to drink artificially flavored drinks also had other health issues, namely excess weight, high blood glucose levels, etc., which contributed to their increased risk of getting diabetes.

One interesting off shoot of the study was that those people who substituted a cup of coffee for one sugary drink, reduced their chance of getting diabetes by 17 percent!
Nonetheless, if you choose to drink diet soda, try and do it in moderation. While these studies may be disputed, the one thing they all had in common was that you had to drink more than 1 diet soda to begin causing significant problems. Diet Coke and Diabetes? Consume at your own risk!

Or, maybe choose to drink something that has been proven to better your health, as is the case with green tea and coffee.