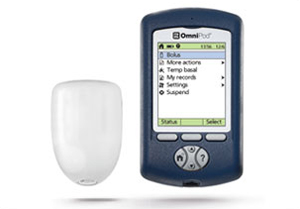 Over three years ago, I first reviewed the Insulet OmniPod insulin pump. At the time, it was a revolutionary new approach to pump therapy. Well, the latest version of the OmniPod, introduced in June 2013, has built upon its innovative roots to create an entirely new product that really stands on its own.

That doesn’t mean there haven’t been some past complaints along the way. However, I think you will see that the new version of the pump has really been a massive step forward. The new changes are focused on the user experience and I came away very impressed with the breadth and depth of the changes from the older version.

The OmniPod is the only insulin pump on the market that does not have a tube connecting the pump with the cannula. Instead, the pump system comes in two devices. First, the Pod is a small device that holds the insulin and cannula. The Pod attaches to your skin with an adhesive and dispenses the insulin. Each Pod last for approximately 3 days, then is replaced with a new Pod.

Second, you have the Personal Diabetes Manager or PDM. This device looks like a cell phone and holds the brains of the system. It communicates wirelessly with the Pod and tells it how much insulin to deliver at any given time.

I don’t often come away saying that the advantages are too numerous to mention. However, this really is the case with all of the improvements to the latest OmniPod. Here are a few worth noting.

Vibration Mode: You can set the device to vibrate instead of ring, when an alarm goes off.

Self-Inserting Cannula: Really? Yes, really. Attach the Pod to your skin and press a button on the PDM and the cannula slides in on its own. Very Cool! There is also a small window on the Pod that let’s you visually verify that the cannula has inserted into your skin.

Screen: The color screen that has a backlight for low light glucose testing. The new version has a 60 second light versus 20 seconds on the previous version.

As you can probably tell, I like the new version of this device. Is it perfect? Well, this depends on the user. Here are some possible disadvantages.

Insulet has made a huge improvement with their latest offering. If you compare the feature of the old system with the new system, you will be surprised with the comprehensiveness of the upgrades. Their website (listed above) details these upgrades nicely.

The pump is still subject to the Pod adhesive coming undone and possible pod malfunctions, but I have not yet reviewed an insulin pump that does not have its issues. Insulet has some nice resources to help reduce these issues. I think if you like the convenience of a tubeless system, you will most likely enjoy this pump very much.