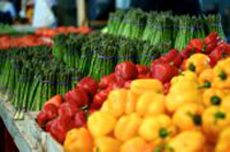 There is a lot of “buzz” concerning the raw food diabetic diet. This raw food diet review looks at the mysteries and misconceptions surrounding this hundred year old diet.

The diet is not highly organized and there are no major corporations who have developed menu plans to help the consumer.

However, this is exactly the point of the diet. It is a return to simplicity. Corporations have a difficult time monetizing simplicity, especially when it comes to something as basic as raw food!

Before we delve into the specifics, please realize that there are several different factions of Raw Foodists or Rawism (someone who follows the diet). These factions range from raw vegans (no animal products whatsoever), to raw vegetarians (milk, cheese and eggs are okay), to raw carnivores (some raw fish and other meat is acceptable). This diet review will mainly focus on the middle ground advocated by the raw vegetarians.

HOW DOES THE ROW FOOD DIET WORK

Raw food cuisine is, well, raw. Rawists believe that we should only eat raw plant food that is unprocessed, uncooked and unpasteurized. The food should also be organic if possible.

Food is never cooked above 116 degrees Fahrenheit. Heating any food above this temperature is said to decrease the nutritional content of the food and destroy valuable antioxidants and digestive enzymes.

Anyone who follows these tenets 75% or greater of the time is said to be following a raw food diet. The diet consists of the following food types:

From a weight loss standpoint, eliminating most meat and processed food has a significant effect on many people in helping them adjust their eating habits resulting in weight loss. Without the bulky carbohydrates and rich processed foods (particularly those heavy in processed sugar), the raw food diet and weight loss go hand in hand.

It is important to note that the diet is usually not adopted “cold turkey.” Most raw foodist ease into the diet over an extended period of time, sometimes over a period of years. Why is this important?

The diet is a fairly extreme departure from most normal diets people are used to. Plus, it can be difficult to learn how to make sure you get the right mix of calories and nutrition. Even the best diet done incorrectly can be harmful. The raw food diet is no different.

The benefits are reported to be many:

Okay. So what is the benefit of the raw food diabetic diet? The diet is low in trans and saturated fat. It is super low in sodium and processed carbohydrates (nonexistent). The diet is also typically rich in magnesium, dietary fiber and phytochemicals.

The immediate benefit for diabetics is to lower your weight and eliminate many of the unhealthy foods the average person typically consumes. The diet is also low in sugar, other than found naturally in fruits and vegetables. No processed sugar is allowed. It may (not proven) have a positive effect on blood sugar control.

The diet is also viewed as keeping you healthy from many of the complications that tend to plague diabetics, such as heart disease. The diet, by its nature, lowers cholesterol because of the lack of “bad” fats.

As you may have guessed, this diet is a bit extreme. As such, criticism has been directed its way. First, there has been very little scientific research that has directly studied Rawism. More commonly, the diet’s proponents tend to point to positive studies regarding vegetarian lifestyles. But, this is not the same thing. Vegetarian principles differ somewhat from raw food tenants.

Other critics argue the following:

Raw food is NOT as healthy as cooking food. (Some foods are more nutritious cooked)
Increased Food Poisoning (Some vegetables and grains and particularly for meat)
Very Hard to Get the Right Mix of Nutrition and Calories (children and pregnant women should avoid the diet)
Dieters have to consume a massive amount of food (up to 7-10 pounds a day to get the right caloric and nutritional mix)

Proponents swear by the health results they achieve through the diet. But as noted in the previous section, there are risks. Making sure you get the right nutrition can be difficult and will require a steep learning curve.

However, remember that this does not have to be an “all or nothing” diet. Raw food is generally very good for you, the heavy criticism starts to appear when you get into making the diet 75% of your diet or greater. Most people start of easing into the diet over time, sometimes years, so don’t be afraid to give the diet a try, at least in moderation to start.

I would argue that incorporate the raw meat and dairy into the diet somewhat takes away from the benefitial nature of the diet. Also, if you would rather compromise on the “raw” nature of the diet, but still eat vegetables, fruits, etc., check out my discussion on the whole food plant based diet.

The diet is the cost of food and related educational tools (e.g., books, recipe books, etc.).