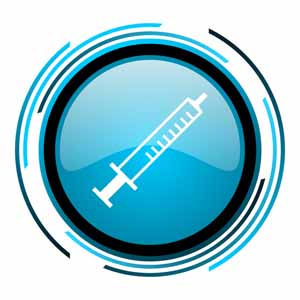 Diabetes insulin treatment can be complicated. Insulin is needed to help sugar transfer from the blood to the cells so that the cells can have energy. If your body does not produce enough, or any, insulin, you must take some for this transfer process to work properly. Today, all insulin produced in the United States is now bio-synthesized, rather than produced from pigs or cattle as was traditionally done.

Regular or Short Acting Insulin starts to take effect within 30 minutes, peaks approximately 2-3 hours after injection and lasts for 3-6 hours.

Long Acting Insulin starts to take effect 6-10 hours after injection and is effective for approximately 20-24 hours.

Injection. This is just like it sounds. Insulin is self injected into the skin using a needle and syringe (the hollow tube that holds the insulin solution). Sometime people use a device called an insulin pen, which simply looks like a pen, but is used to inject insulin.

Insulin Pump. This device, about the size of a cell phone, is worn on the body. A small tube with a needle on it connects the device to your skin and stays connected for several days. Insulin is then pumped into the body at a predetermined rate.

How Much and When?

This answer depends on the person. Some diabetics take insulin three or four times a day, others once a day. The treating physician will determine the appropriate amount of insulin needed and when to take it.

A good diabetes insulin treatment centers around the insulin strength. The strength, however, will depend upon each individual patient. Generally, all insulin is suspended or mixed with another solution. The most common strength is U-100, meaning it has 100 units of insulin per milliliter of fluid. This strength is the most common in the United States. You should note that other countries may use different strengths.

For example, U-40 strength is used in Europe and Latin America. This is important because if you are traveling in these areas you will need to bring your own insulin or learn how to appropriately match your needed insulin strength to the insulin available in the country you are visiting.

There you have it. The introductory course on diabetes insulin treatment.