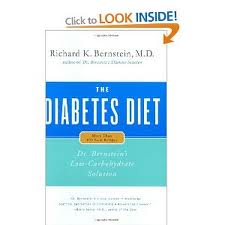 The book the Diabetes Diet is a lifetime crusade of its founder Dr. Richard K. Bernstein. Dr. Bernstein has had type 1 diabetes since he was a child and has spent his life developing and studying what he believes is the proper diet for diabetics, particularly type 1.

To be taken seriously, he even went to medical school at the ripe old age of 48 so that his work would be given more weight by healthcare professionals.

Dr. Bernstein is vehemently opposed to the diet advocated by the Americans with Diabetes Association. He also disagrees with diets based on the glycemic index.

HOW DOES IT WORK?

Similar to other newer diabetic diets (such as the Atkins Diet), Dr. Bernstein’s diabetes diet advocates a sharply reduced intake of carbohydrates. In fact, the daily carbohydrate intake is only 30 grams. In many instances, this amount will be lower than

even Atkins. The Diabetic Diet also is unique for several reasons.

First, it is not done in phases. Other low carbohydrate diets like to have a jump start phase where the participant loses a lot of weight and essentially shocks the metabolism into burning fat and protein for energy.

Dr. Bernstein believes this is dangerous, because some people have a tendency to lose muscle mass, not excess fat. Once lost, the muscle mass is hard to replace.

Further, he believes that having two or three phases to a diet discourages ongoing participation in the diet, thus people quit. It simply is too confusing for people. The tragedy is that they tend to gain back the weight they lost, but often times it is fat gain, not the muscle mass they may have lost. I couldn’t agree more with him on this point.

Instead, this diet advocates one plan from the beginning. He feels it is easier to implement and maintain. The other advantage for being consistent is that your blood sugar will not fluctuate between the different phases of the diet. With The Diabetes Diet, the whole plan is to maintain a healthy diet and a normalized blood sugar level. By being consistent from the very beginning, you should be able to eat healthy and lose weigt

WHY IS THIS DIET  RIGHT FOR DIABETES?

The main selling point for this diet is that it is designed by a diabetic for diabetics. Dr. Bernstein believes that the low carbohydrate diet is supported by many medical studies. He advocates that the consistent nature of the diet (that is to say there are no multiple phases) allows for better blood sugar control.

It also requires less alteration of medications that sometimes has to occur if someone was doing a diet which had more radical phases. Keeping the diet consistent from the beginning requires people to only learn one new diet, not the intricacies of a diet with multiple phases.

Dr. Bernstein advocates daily exercise. However, he does not devote any significant portion of his book to exercise.

WHAT THE CRITICS SAY:

Dr. Bernstein advocates daily exercise. However, he does not devote any significant portion of his book to exercise. Like any radical dietary change, learning to eat a healthy diet with less than 30 carbohydrates a day will take some getting used to. In fact, some participants complain that strict adherence is very difficult. Moreover, the variety of food one can eat is limited, so get used to a non-diverse group of food. As noted above, Dr. Bernstein’s diet is a complete departure from the diet recommended by the ADA.

The diet is a radical change in eating habits for most people. Nonetheless, Dr. Berstein is living proof that a healthy diet can lead to a healthy life. If you are ready to take charge of your health, it is worth looking at the Diabetes Diet to see if you can make the transition with his help.

As always, I would also encourage you to take a look at a whole food plant based diet.

The cost is pretty straight forward: The price of the food and you will need to buy the book.

This book gives an overview of the diet: What it is and why you need to follow it. It also provides more than 100 recipes to get you started.

The Diabetes Solution also provides an overview of his recommended diet, but goes into much great detail about the diet’s background and necessity.