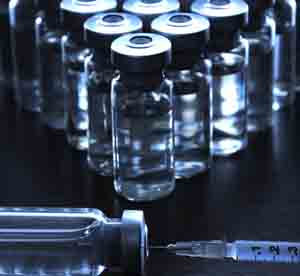 Humalog insulin is the brand name for a type of synthetic insulin used to treat many diabetics. The generic terms of this type of insulin is lispro insulin from rDNA origin. The Insulin is produced by the pharmaceutical company Eli Lilly and Company.

Like all synthetic insulin, it is delivered via subcutaneous injection. Most humalog insulin is rapid acting. This means that the insulin can take effect in as little as 5 minutes of injection, peaks roughly an hour later, and works for approximately 2-4 hours.

Rapid acting insulin is very common and is particularly effective at controlling hyperglycemia. This type is also used to help the body meet its insulin requirements during meal times.

Typically, type 1 diabetic Humalog users will also need to use another type of insulin that can provide a longer acting result. Using the combination of insulin allows the person to have the desired insulin needs met throughout the day.

Comparatively, type 2 diabetics may be able to use Humalog rapid acting insulin without any other insulin. However, there may be a need to supplement the insulin with other medications and/or treatments to control blood sugar levels.

Here is the “official” or technical description of Humalog. The medication is called a human insulin analog (i.e., synthetic or manmade) that is rapid acting. It is a parenteral (i.e., delivered by injection) blood glucose lowering agent.

The medication is manufactured using a strain of the Escherichia coli bacteria that has been genetically altered in a laboratory to make it very similar to that of human insulin. To do this, scientists add the gene for insulin lispro production. Chemically, the manufacturer will create the human insulin analog by reversing the genetic makeup of the amino acids at positions 28 and 29.

None of this information is particularly helpful or meaningful for someone who has been told to take this medication to control their high blood sugar levels. However, what you should understand about this chemical process is that Humalog starts out as a non illness causing bacteria and ends up as insulin that is essentially identical to that of the insulin that the human body produces. This is one of the reasons that this particular diabetes treatment option is so effective.

Generally, the medication is available in for all delivery options, syringe, pen. and insulin pump. One popular method of delivery is through an insulin pen. Humalog has three different pen choices.

What You Should Know

Each person’s insulin needs will vary. How does your doctor determine your needs? The following factors include, but are not limited to, the following:

It is important to note that once your doctor prescribes a dosage of the medication, it is possible that you will need to have it adjusted from time to time. This will occur any time that there are changes in your lifestyle, weight or even other needs. Doctors will encourage you to continue to test your blood sugar levels since any significant change in it should be reported.

When taken at meals, it is typically taken within 15 minutes before or after the meal. It is best to take the medication 30 to 60 minutes prior to eating to ensure that it provides optimal glucose control. These are only general guidelines, so please consult with your doctor and the medication directions for your specific usage requirements.

Some people may have an allergic reaction to Humalog insulin, especially if they have had other reactions to other types of insulin. In addition, hypoglycemia, which is a drop in the blood sugar to a very low level, can occur. Hypoglycemia risk only underscores the need to properly monitor blood sugar levels when taking Humalog insulin. Lastly, some people may have a rash or injection site irritations as well.