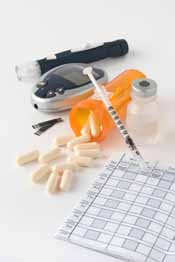 Humulin insulin is the brand name of a group of synthetic insulin products originally developed by Genetech, but later sold to Eli Lilly and Company. Humulin products have been around for years but are slowly being discontinued and replaced by more modern choices.

Currently, Humulin comes in four different types. However, it is not clear how long they will continue to be on the market.

Humulin N (human NHP Injection with rDNA origin). This is intermediate acting insulin. It has a slower onset and a longer duration than Humulin R.

Why Humulin Insulin is Highly Regarded

Humulin insulin is synthetically produced to be structurally identical to the insulin produced by humans. As with most modern insulin products, it is not made using animal insulin.

The drug itself is man made from the non disease producing strain of Escherichia coli bacteria that is genetically altered to produce human insulin. As listed above, there are various formulas available and those are based on a percentage of how much Human Insulin Isophane Suspension and how much Human Insulin Injection is mixed together.

This medication lasts as long as 24 hours, though doctors can prescribe the medication to be used as frequently as two times per day depending on your condition. Keep in mind that this insulin reacts very differently from one person to the next and therefore it is very important, especially during its first uses, to ensure that the medication is taken properly.

What You Should Know

If your doctor has suggested that you take Humulin insulin for treatment of diabetes, you should be aware of several things.

It is possible that Humulin, like other types of insulin, can lower your blood sugar too low. This is called hypoglycemia. If you have low blood sugar readings or you have nausea, headaches, confusion or weakness, do consult your doctor.

You will take Humulin through the use of an injection under the skin. You should always have a clean needle for injections and you should never share them. You can take Humulin with an injection pen, which ensures you get the proper dosage of medication each time.

You will get the best results possible by practicing other treatment methods as well, including diet, exercise, weight control and testing your blood sugar.

How It Is Used

Your doctor will prescribe a specific amount of Humulin to be injected and he or she will tell you when to inject the medication and the best locations to inject. Typically, it is important that the medication is used at the same time on a regular basis.

Like most medications, Humulin can cause some side effects with the most frequent being hypoglycemia, or low blood sugar. The onset of hypoglycemia can often be exacerbated by missing or delaying meals, taking too much insulin, getting more physical exercise than normal, being ill, or a change in the body’s need for insulin.

Some people may have mild or moderate side effects attributed to Humulin, however it is possible to be allergic to the medication as well. If you have any confusion, fever or rashes, talk to your doctor. It is also possible that Humulin can lead to high blood sugar levels in some people. Careful testing of your blood sugar is critical.