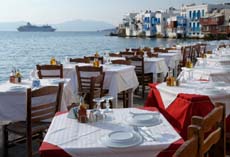 The Mediterranean diet and diabetes health connection is very strong. In fact, this diet is one of the top diets you can adopt to avoid diabetes or improve your condition if you already have diabetes. Moreover, the diet has been shown to improve many of the secondary conditions typical of diabetics, such as cardiovascular disease, weight gain, high blood pressure, high cholesterol, etc.

Unlike other diets such as the Atkins, South Beach and Zone Diets, the Mediterranean diet is not exclusively linked to any one company or individual. Instead, there are dozens of books and companies that promote the diet. I like this because the diet stands on its own. It is not propped up just to sell you a diet program.

As the name suggests, the Mediterranean diet focuses on the traditional foods eaten in the region primarily Crete and southern Italy, although Spain and other regions are included.

How does it Work?

Like other diets (South Beach, Atkins, Zone), the Mediterranean is lower in carbohydrates than a traditional western or American diet. Fat, primarily olive oil, amounts to 25% to 30% of the daily calories. Vegetables, fresh fruit, whole grains and fish are the primary foods. Red meat and dairy is limited and a small amount of red wine is also advocated.

Weight loss and healthy lifestyle (lower rates of disease and diabetes) are attributed to several factors. The fat intake is primarily monounsaturated fat from olive oil, not animal fat. Much of the fat consumed in a traditional American diet consists of saturated fat, which is decidedly not good for you.

High dietary fiber from fruit and vegetables is also linked to lower cardiovascular disease and other ailments, as is light amounts of red wine.

Carbohydrates are allowed but usually in more modest amounts and in the form of whole grains, not processed carbohydrates (as found in the American diet). These differences allow for more nutrition and less weight gain.

The diet can be relatively simple to implement. However, it will require you to change your habits and learn new foods and recipes. It is not a onetime fad diet, but is a total lifestyle change.

To get an idea of how the Mediterranean diet works in practice, take a look at the following food pyramid, supplied by the Oldways Preservation Trust, a non-profit group aimed at supporting traditional eating habits.

You will note that the diet calls for very little red meat and dairy, while supporting a lot of whole grains, fruits and vegetables.

Why is the Mediterranean Diet so Popular?

There is a vast array of research that supports the Mediterranean diet and diabetes health. This research not only supports the avoidance of many diseases (e.g., diabetes, cardiovascular disease, etc.), it also supports the improvement of these conditions. Let’s take a look at a few studies to demonstrate.

Mediterranean Diet’s Effect on Diabetes: A 2007 study tracked the dietary, lifestyle, risk factors and medical care of over 13,000 university graduates throughout Spain over 4 years. Those who strictly followed a Mediterranean diet were found to have an 83 percent lesser risk of developing diabetes. Make sure you read this again! The study defined the diet as one of high consumption of olive oil, nuts, fruits, vegetables, legumes, cereals, and fish. In contrast, the consumption of meat and dairy products was limited. The diet was high in fiber and allowed for only moderate use of alcohol.
Adherence to Mediterranean diet and risk of developing diabetes, BMJ 2008;336:1348 (University of Navarre)

Whole Grain Consumption: This study was a summation of previously published studies on the intake of Whole Grains as advocated by the Mediterranean diet. The end result is that people who ingest three or more servings of whole grains have a 20-30 percent lower risk of developing cardiovascular disease than people who consume very little whole grains. Similarly, the type 2 diabetes risks were reduced by the same amount. A risk for developing many different types of cancer was also reduced, but no specific risk percentage reduction was provided. Journal of Public Health Nutrition, 2011 Dec; 1412A):2316-22 (University of Granada)

Lower Cardiovascular Disease Risk, Better Insulin Sensitivity: Over two years, two groups of men, one overweight and the other obese lost significantly more weight than the control groups and had a better sensitivity to insulin. They achieved these results following a Mediterranean diet. The obese group also was subject to additional exercise and lower caloric intake.Cardio Res Pract., 2010 Dec 20;2011:293916.

Better Glycemic Control and Weight Loss for Type 2 Diabetics: This study looked at 215 newly diagnosed Type 2 diabetics. The study compared a Mediterranean diet to a low fat diet. At the end of the four year study period, the participants following the Med diet had a significantly lower chance of having to use blood glucose controlling medications. They lost more weight, had better glycemic control, and lower risk of developing cardiovascular disease. Ann Intern Med. 2009 Sep 1;151(5):306-14. (Second University of Naples)

These studies are just the tip of the iceberg, when it comes to the advantages of the Mediterranean diet.

Daily exercise is a recommended component of the diet.

What the Critics Say

Critics cite numerous conflicting studies showing that individual facets of the diet have not been proven beneficial, some in fact being harmful. For example, some studies cite the benefits of saturated fat and polyunsaturated fat (the Mediterranean diet promotes monounsaturated fat). Also, the effect of genetics, exercise and the region itself are unclear. The diet may also be poor in iron and calcium.

Proponents of the diet respond that it is not any one aspect of the diet that works, but the totality of the foods combined with the exercise. Any one thing, or lack of one thing, can be detrimental in all aspects of life, including the Mediterranean diet and diabetes care in general.

The diet has some of the strongest research linking it to good health, particularly in combating diabetes. Learning new recipes and making good food choices is difficult. This is particularly difficult if you are not currently eating many of these foods, such as fish.

After years of research and trying various diets, I think this diet is the second best diet you can follow. The best is a whole food, plant based diet, which eliminates all animal products and vegetable oils, including olive oil. If you are not willing to give up all animal products (meat, poultry, dairy, etc.), then the Mediterranean diet is a solid choice.

As always, consult your health care provider for what is best for you.

Costs: The cost can be what you make it. There are multiple cookbooks that describe the diet. As you’re eating less meat and dairy, your total food bill should go down.