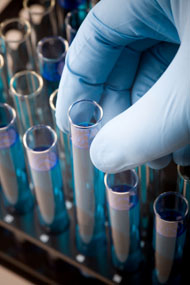 Synthetic insulin was first made in 1978 by scientists at Genetech, Inc. and City of Hope National Medical Center. This achievement was a giant step forward in insulin production for people with diabetes.

Previously, pig and cattle pancreas glands were the only viable method of production. While sufficient for most diabetics, the use of animals to produce insulin did cause some allergic reactions, as it was not a true human match to insulin.

The process is somewhat complicated so the following is an excerpt from the Genetech press release explaining the actual scientific process:

Insulin is a protein hormone composed of two chains of amino acids: an “A” chain and a “B” chain linked together by two disulfide bonds. The “A” chain is composed of 21 amino acids and the “B” chain of 30 amino acids, each arranged in a uniquely ordered sequence.

Proteins are made by translating the genetic information which is carried in a cell’s genes. Scientists synthesized in the laboratory genes for the two insulin “A” and “B” chains. This was accomplished by chemically linking together small pieces of DNA sequence and then joining them in a specific manner to form complete genes.

Once the genes were synthesized, they were stitched into circular DNA strands called “plasmids” using special enzymes to perform the molecular surgery. Plasmids are rings of DNA which are found within the cell. The newly constructed plasmids containing the transplanted genetic material were introduced into a benign E. coli bacterial strain.

Once inside the bacteria, the genes were “switched-on” by the bacteria to translate the code into either the “A” chain or the “B” chain proteins found in insulin. The process is the same as that used by bacteria to produce its own proteins.

When the cells produced sufficient amounts of the “A” and “B” chains, they were harvested to isolate these proteins from the bacteria and purify it. The two chains were then combined chemically in the laboratory to form the complete Insulin molecule which is identical to that produced by the human body.

There you have it. Everything you always wanted to now about synthetic insulin production.